How to Use IDE Arduino Software 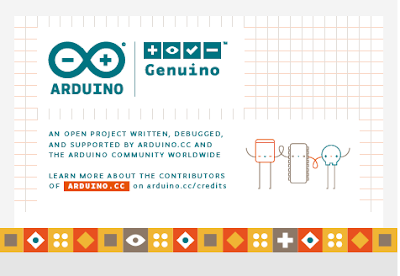 robotics-university.com | After on the previous article about “IDE Arduino software” and “Introduce To IDE Arduino Work Area,” then this article will ask all off you to know how to use IDE Arduino software to build an automation project. Start from make the program (Sketch), then compile the program, and further send compiled program (upload) to the processor chip (microcontroller) that embedded on the Arduino board. For your information, this tutorial run on computer with Windows7 operating systems. 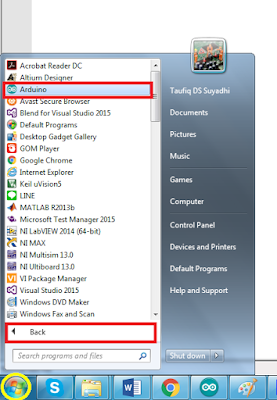 After the steps above done, then opening display of IDE Arduino will appear, as shown on figure 3 below.

Just a moment, then IDE Arduino work area will open as shown on figure 4. 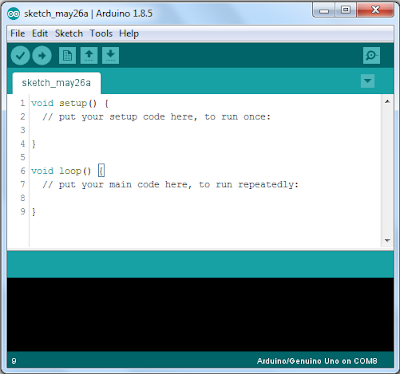 Step 2: Typing the Program (Sketch)
After IDE Arduino work are opened, then we have ready to start our next job, i.e. typing our automation project program (Sketch). On this first Arduino project, I will ask you to make a project to the light-control (ON/OFF) of a LED (light Emitting Diode) component that connected on Arduino Uno board digital pin number three alternately. So deliver blinking LED light effect with time delay as long as 500 millisecond (mS).

To simulate this project, I use Proteus simulator software help. Figure 5 is Arduino Uno project electronics schematic to control the ON or the OFF of a LED component that connected on its digital pin number 3. 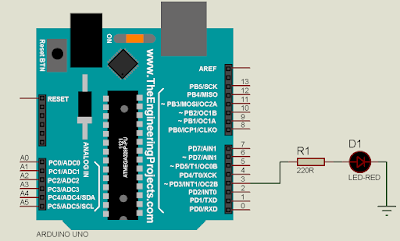 Type the program above on the IDE Arduino text/program editor.

Step 3: Save the Program
If the program has already typed, then in order to we aren’t lost the program file, don’t forget to save it into your computer hardisk. The method to save the program file can be done with 3-ways. The first method, press Save button icon on the IDE Arduino tool-bar, as shown on the figure 6 below.

Figure 6. Save button icon on the IDE Arduino tool-bar

The second method, choose File menu on the IDE Arduino menu-bar, then move-down the cursor and choose “Save (Ctrl+S)” option. See figure 7. 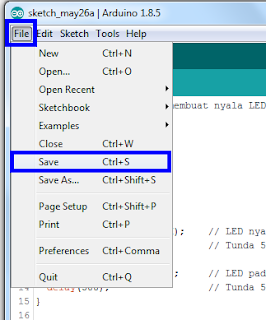 After we do one of the step above, then “Save sketch folder as….” Window will opened. See figure 8. Choose a computer directory as our program file storage. 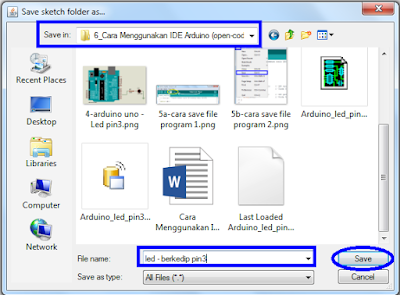 Figure 8. “Save sketch folder as…” window 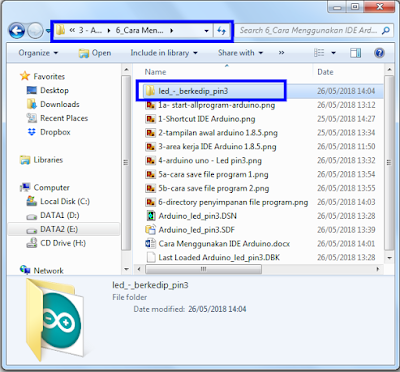 After Save button pressed, then in the storage directory that we choose to save our program file will generate a storage folder automatically. The folder name is same with the program file name. See figure 8 and figure 9.

With standalone folder generation for program file, it will separate our program file from other files or programs in the directory that we have chosen (See figure 8). So this condition facilitate us when will find the other Arduino projects program file in the next time, because the program files are not mixed.

Step 4: Compile the Program (Compile/Verify)
After program file is saved, the next step is translate or compile (Verify) the ino program file, in order it be ready to send (Upload) to the microcontroller chip that embedded on the Arduino board. There is three method to compile a program. The first, with press Verify button on the IDE Arduino tool-bar. See figure 10.

The second, choose Sketch menu on the IDE Arduino menu-bar, then move down the cursor and choose “Verify/Compile (Ctrl+R)” option. 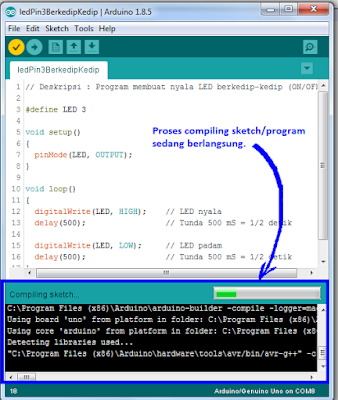 After one of the three compile method above done, then program compilation process will run. See figure 12. 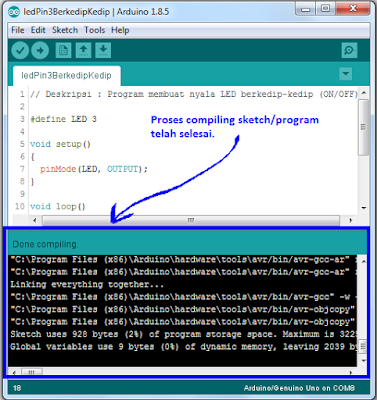 Step 5: Program Uploading to Arduino Board
After program making and compiling steps has done, then last step that need to do in order our project purpose that we make on our first project using IDE Arduino can see the result is send or upload the program into a microcontroller chip that embedded on the Arduino board. Below is the steps that need to do:

A. Connect the Arduino Board to the Computer
The first is connect or install the Arduino board (I use Arduino Uno board) to the computer that we use, as shown on the figure 14. 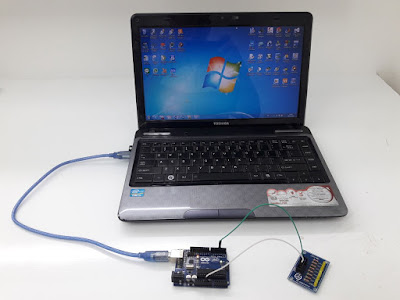 Figure 14. Arduino Uno board connected to the computer 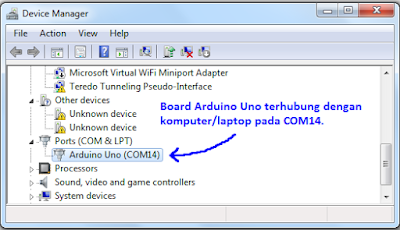 This step need to do, because on the program “Upload” process using IDE Arduino there is a step to choose computer COM port that use for communication/interface line between Arduino board with computer that we use. 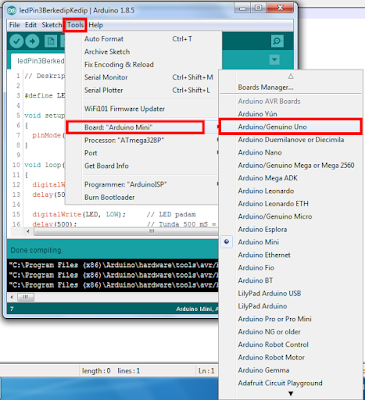 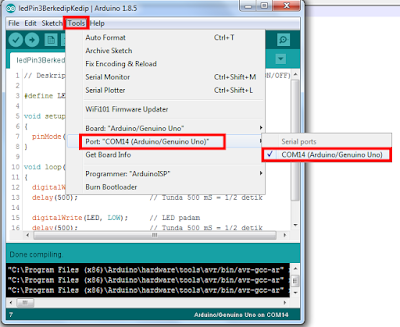 E. Make Sure, the Arduino Board and the Computer Connection Has Corrected
The last step before uploading the program to the Arduino board microcontroller chip is make sure the Arduino board and computer connection has corrected. This step can do with see the notification check on the right-bottom part of IDE Arduino. See figure 18. The information from the notification give information that Arduino/Genuino Uno board has connected to the computer correctly via computer COM port number 14 (COM14).

F. Uploading Program to Arduino Board
There is three program uploading method. The first, with press the Upload button icon on the IDE Arduino tool-bar as shown on the figure 19.

The second method, choose Sketch menu on the IDE Arduino, then move-down the cursor and choose “Upload (Ctrl + U)” option. See figure 20. 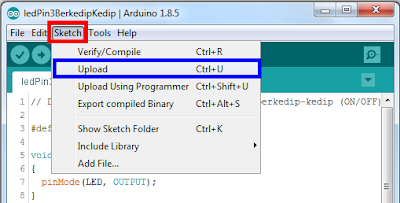 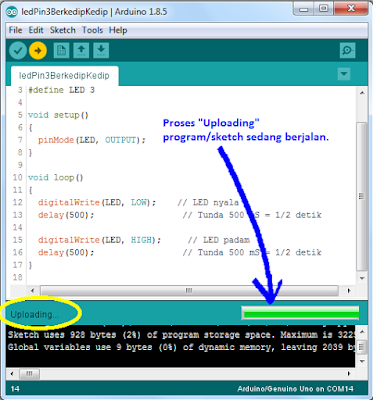 After one of the three uploading step done, then the program upload process will run. See figure 21. 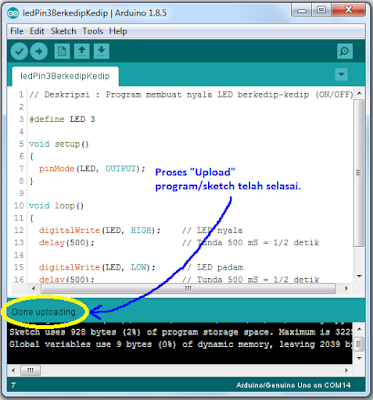 G. Observe the Working Result
If the program uploading process has done successfully, next observe our working result in embedded systems project building using Arduino board. Watch the system behavior that we has built. Has it suit with our plan or hasn’t? If it hasn’t, then do several actions that need to repair errors possibility on the hardware system or also on the software (program) system. However if it has, that mean we have successed in embedded systems building project using Arduino board. Congratulation for us!

Below is our working result video:

Thus the tutorial how to use IDE Arduino. Hopefully it is usefull.