Home » LabVIEW » What is LabView? 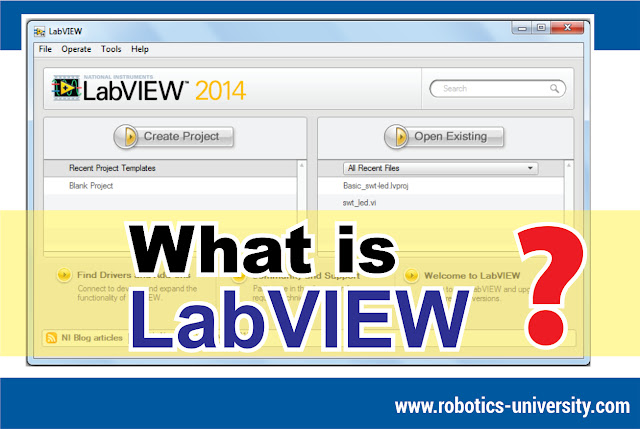 robotics-university.com | LabVIEW (Laboratory Virtual Instrument Engineering Workbench) is a graphical programming language that uses icons instead of lines of text to create applications that created by National Instruments (www.ni.com). In graphical language we just select different blocks and attach them in specific way rather than writing thousands lines of code as we know in text-based programming languages. In contrast to text-based programming languages, where instructions determine the order of program execution, LabVIEW uses dataflow programming, where the flow of data through the nodes on the block diagram determines the execution order of the VIs and functions. VIs, or virtual instruments, are LabVIEW programs that imitate physical instruments. 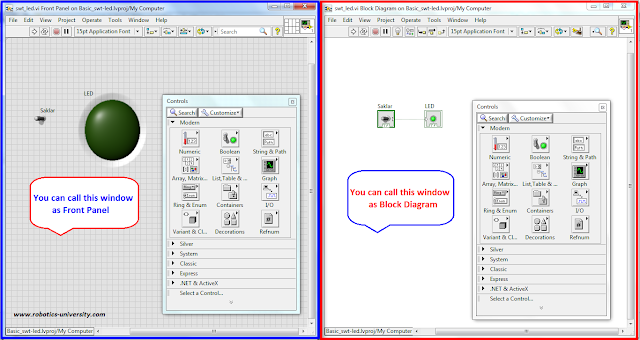 
In LabVIEW, we can build a user interface (UI) application by using a set of tools and objects. The user interface is known as the “Front panel.” You then add code using graphical representations of functions to control the front panel objects. This graphical source code is also known as G code or “Block diagram” code. See figure 1! The block diagram contains this code. In some ways, the block diagram resembles a flowchart.

Virtual Instrument Package Manager (VIPM)
To develop an application using LabVIEW, JKI (National Instrument outsourcer/subcontarctor for LabVIEW) has provided support software that has function to manage library or add-ons toolkit package for LabVIEW, where the toolkits package can be developed by LabVIEW/National Instrument engineer (I mean the toolkits package that has been provided on LabVIEW software when users install it on their computer) or developed by personal or third-party company to support their product in order it can run or control using LabVIEW. The software is Virtual Instrument Package Manager or VIPM.

Further explanation about VIPM, I write for you on separate article, please read the article here!