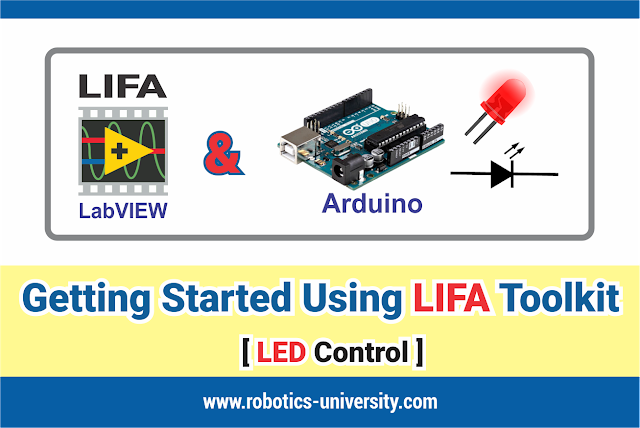 robotics-university.com | Hello my friends, hope all of you always in good condition. Today, I will guide you to build the first LabVIEW application project that implement LabVIEW Interface for Arduino (LIFA) toolkit that we had been installed on Virtual Intrument Package Manager (VIPM). I have explained about the steps on my previoous article, please click here!

A. Hardware - Arduino & LED Circuits
Below is the circuits of a Light Emitting Diode (LED) component that connected on the fourth pin of Arduino Uno board. See figure 1! 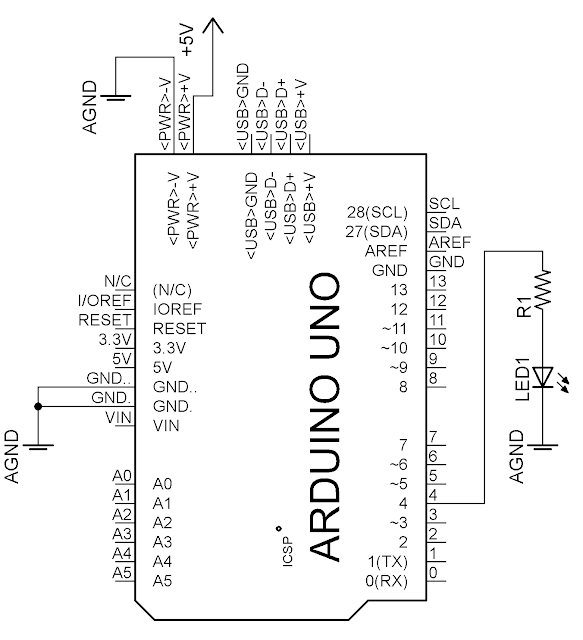 In order we can control the LED, connect the Arduino board via USB port to a computer (PC/Laptop) that LabVIEW and LIFA toolkit has been installed on that. See figure 2! 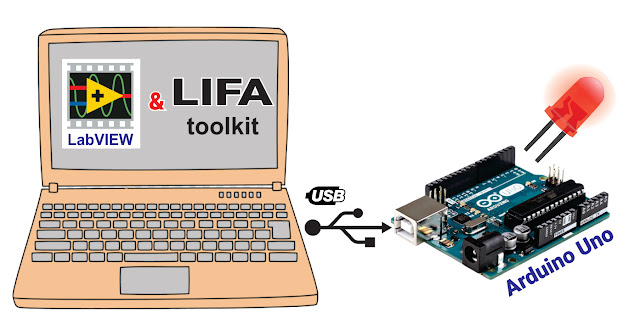 B. Program Descriptions
For this project, we have to create a LabVIEW graphical program that has purpose to control LED (ON/OFF) condition. If a Light Emitting Diode (LED) component that connect to a selected Arduino pin (in this project I use fourth pin. See figure 1) set to one (HIGH logic) using "Digital Write Pin" LIFA object, the LED on that pin will light up (ON condition), vice-versa, if selected Arduino pin set to zero (LOW logic), the LED will in OFF condition.

C. Text-based Program
If we create a text-based program to control LED (ON/OFF) condition with follow the program description on B point above. The program is as shown on the figure 3 below. I type that code on Arduino IDE software. 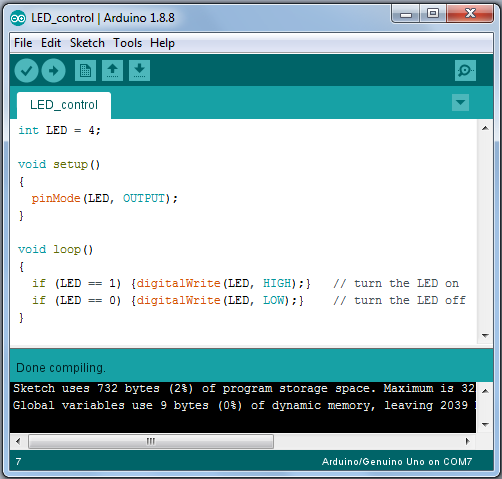 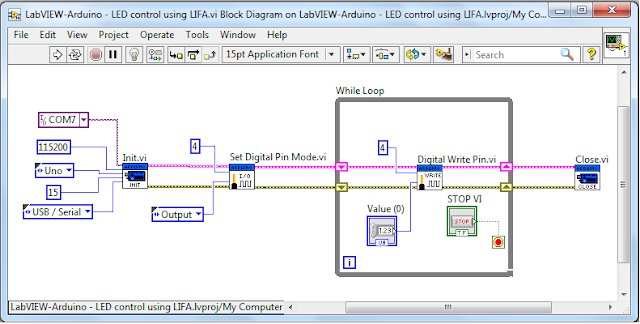 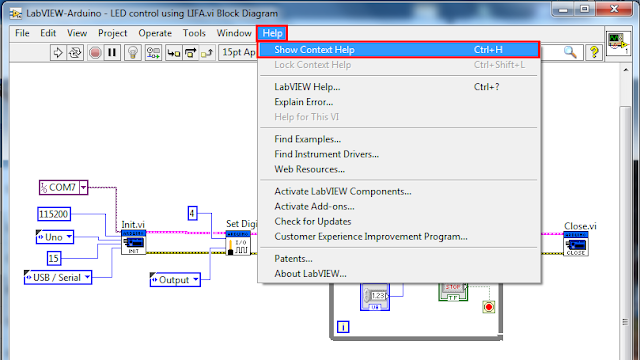 After you select “Show Context Help” option, then left-click an object to open a “Context Help” window of the object. Once you click an object, the descriptions of the clicked object will show on its context help window. On this example, the descriptions of “Init” object, “Set Digital Pin Mode” object, “Write Digital Pin” object, and “Close” object shown on Figure 6, Figure 7, Figure 8, and Figure 9. 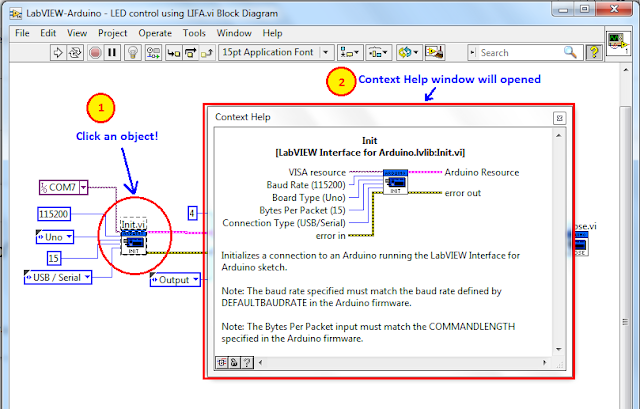 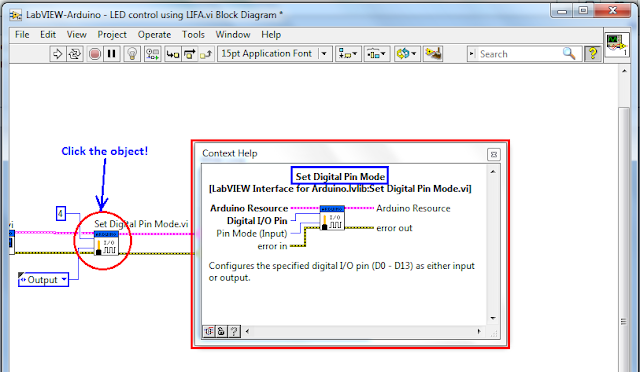 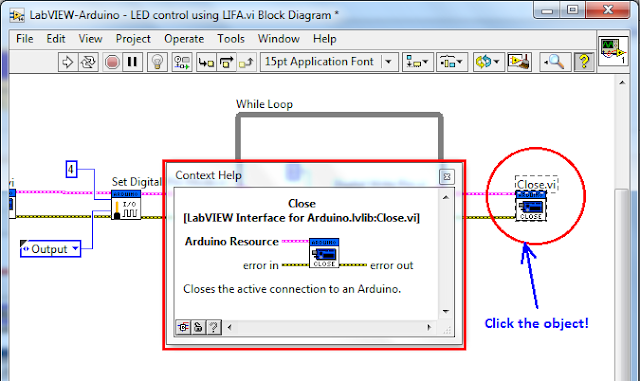 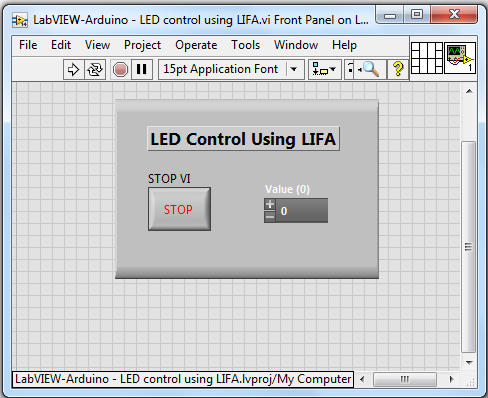 The main part of the GUI on Figure 10, is a “STOP” button and a “Numeric Control.” Stop button use to stop program looping (on this example, While Loop), in order the program stop running. While “Numeric Control” use to set the pin-value (0 logic or 1 logic) of “Digital Write Pin” object.

F. LabVIEW Project - Complete
Figure 11, show to us an image of a complete LabVIEW project using LIFA toolkit package. There are displayed the Project Explorer window, the Front Panel window, and the Block Diagram window. 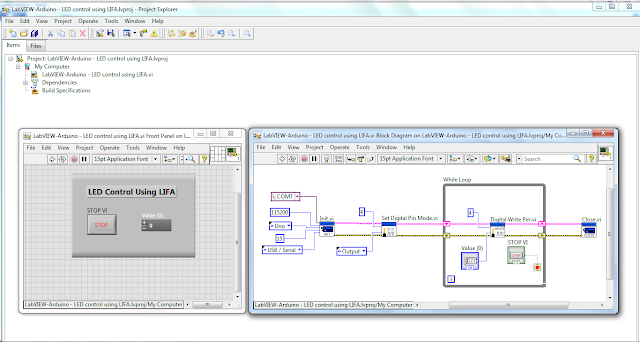 
Note:
If you face errors when you follow my guidance to create LabVIEW project using LIFA toolkit, I recommend you to read article entitled “LabVIEW Interface for Arduino Error 5002: Unable to EstablishConnection”